Less More
5 years 9 months ago - 4 years 11 months ago #22146 by Cubo15
Cubo Kick 15 was created by Cubo15
Cubo Kick is a mid bass bin to enforce the Cubo-series in it's weaker range (100 - 125 Hz and higher) or any other bass cabinet that lacks in that region. Over 10 prototypes were build to ensure a maximum output that's on par with current kick bin designs like the Xtro 2 x 15" section and the HD15. Future measurements will prove that, till then you'll have to take my word on it 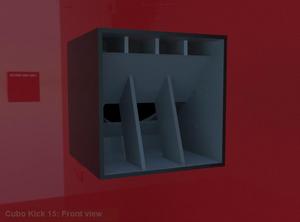 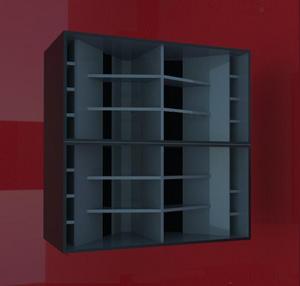 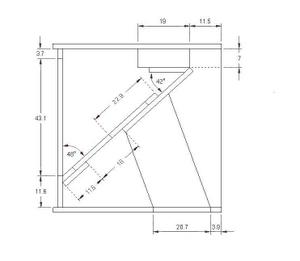 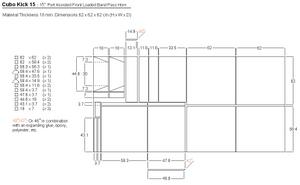 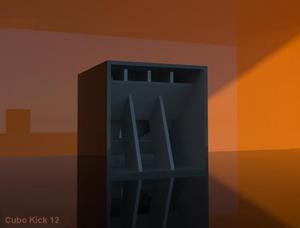 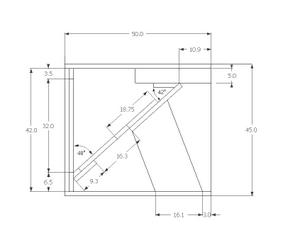 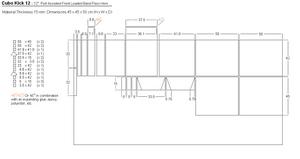 Designed around the 18Sound 15ND930. Other drivers that should work:

Designed around the 18Sound 12ND830. Other drivers that should work:

Recommendation is to use 3" VC drivers, however there's plenty of 4" VC drivers that will work.

Cubo Kick needs a consensus of it's usable frequency range and new measurements. I like to keep it from official release till that's cleared. It's designed to keep up with 2 or 3 Cubo 15 slash Cubo 18. For example, on top of two Cubo 15's it will raise the height for the high mid top to ~180 - 190 cm, bringing it well above the crowd ears.

It doesn't need high excursion drivers, though they will work, I expect the excursion to be 3 - 4 mm (6 - 8 mm p-p) in it's working range up to 500 W. That means that combined with a 3" voice coil, there's plenty of low Qts drivers, medium to low Vas, high Fs, low-ish Mms, decent BL, preferably low Le drivers out there for people on a keen budget or real quality affordable for the working man. Oh yeah, high EBP!

Options for influencing how it sounds:

- As it's a port assisted design that has effectively 4 ports of equal size, you can gradually lower the tuning by closing one after another. Lower tuning means it does go lower but at the same time lowers the output below ~110 Hz.
- At the same time it's an effective measure to compensate for the Fs, Qes/ Qts and Vas ratio and size for a particular driver, some drivers might even be best of in a closed cabinet.
In other words, you could try what you like best or what the driver likes best or both.

Another point would be the use of damping, like glasswol, rockwol, synthetic woll, Pritex, etc. Without going into the advantages or disadvantage of one or the other. Use some in the rear chamber as long as the flow to the ports isn't hindered. You could even use some in the beginning of the horn. Personally I would cover most but not necessarily all walls/ sites, that's also to a degree changed by the circumstances at hand. 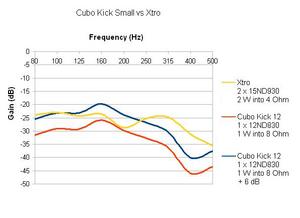 Less More
5 years 9 months ago #22148 by Tetris
Replied by Tetris on topic Cubo Kick 15
Excellent! So 1 CuboKick to 2 Cubo15/18's? Looking forward to seeing the plans!
Thanks

Less More
5 years 9 months ago - 5 years 9 months ago #22153 by bjm362
Replied by bjm362 on topic Cubo Kick 15
Long time no see Cubo! My fault I have been gone due to injury. BTW, before I got injured I did not buy the drivers you had said were not suitable. I have a collection of pairs of drivers with various Cubo designs in mind. Including a need for the design you just posted. Do you already have any plans of these in plywood thickness available in the U.S.? There is no 15mm plywood here.

I am a bit anxious myself. As I mentioned 2 of the 15s I have should work well in a regular cubo 15, two of them are very high efficiency, but not ideally suited for that frequency range. They should be relatively ideal for this application. I would certainly be able to report back with some results as well. Could be useful!

Before I designed Cubo 15, I had already heard and build 30 "other bass cabinets" ranging from reflex to front loaded horn, for 12", 15" and 18" drivers. So I had a large field of reference.

The number of total prototypes made for Cubo Kick 15, 12 and 212 combined is above the 10. I also made an Xtro 2 x 15" bass section and an HD15 for comparison. Some of these prototypes were octagonal horns, with and without phase bung/ plug. So you could say, as far as research and development goes, I went all out. Especially as it's a freespeakerplans design.

So as far as my own opinion goes it's all good but then again not everyone is a fan of the other Cubo-designs, so not everyone might agree.

@BJM362: The usual follow up: I present a plan, in the mean time work out small mistakes that might have sneaked into the plans. Then release the 12" version and other version for those that want 62 x 62 x X cm, then if the plan is succesfull, I release the non-metric version but only if I'm not too busy in the non-internet life. I'm currently sneaking up on tiny-winy, well hidden mistakes.

Less More
5 years 8 months ago - 5 years 8 months ago #22205 by bjm362
Replied by bjm362 on topic Cubo Kick 15
Cubo, in all honesty I am really glad to see you still participate here. When I first showed back up kind of lurked for a bit because I didn't recognize most the users!
Your designs are effective, useful and simple enough to build, I can probably assemble them even with my bad back..If I can get them cut. I guess for the completed plans that I have workable drivers I can get convert them to US available wood thicknesses by hand. If I can take good cut sheets into Home Depot they will cut it for me for a small extra fee! I am just nervous about getting it home and part of it being wrong. That would not be cool!

Anyway I think I can still be the first here in this city to have CUBOs period, and best to you!
Last edit: 5 years 8 months ago by bjm362.

Less More
5 years 8 months ago #22260 by t.geessounds
Replied by t.geessounds on topic Cubo Kick 15
when will the cubo kick be release ?? am up for if to build one for testing


it does however need a consensus of it's usable frequency range. That's also the reason I like to keep it from official release till that's cleared

Also, my spectrum analyser decided to stop working, so I'm unable to measure it officially and a Cubo plan wouldn't be the same without a measurement. That being said, send me an e-mail and the plans will come your way.

May I know the result during the HD15 comparison?